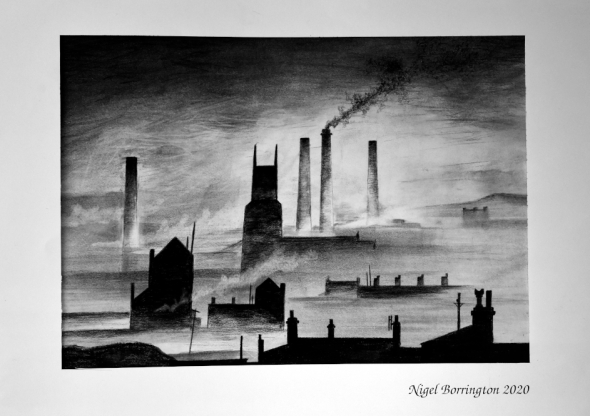 This weekend I gave myself sometime to add a physical Charcoal on cartridge paper drawing to last weeks Digital version in my last post. I wanted to do some work in the style of Trevor Grimshaw as I like his drawings very much and felt there was a lot of value in attempting to produce my own versions, I feel that his use of monochrome with its many varying tones, so carefully worked is wonderful…

I guess we always, no matter how long we have lived away from our place of birth feel that Home is Home!…

I have lived here in Ireland for almost two decades now but when it come to artists I still have two at the top of my list who lived and worked as artists in or around the greater Manchester area in the UK.

At the top of my list will always be Ls Lowry 🙂 I have a post on his work here Ls Lowry and here, If you want to know more about his life and work, Manchester has a great gallery (The lowry Gallery) dedicated to his life and his art work, its a fantastic Gallery and a great source for his history.

While I love the art work of LS Lowry the art work by my other favourite Manchester artist Travor Grimshaw has always been very much in my mind when I think of amazing drawings from the industrial past of the city Manchester, along with many other surrounding towns which at the time contained industrial landscapes such as Bolton.

What I like most about Grimshaw’s work is his ability to limit this images down to a single style and his limited use of materials – along with his his use of moody monochromes. I work a increasingly with drawings these days and love the feeling produced when just using medium’s such as charcoal or pastels along with graphite.

Here its like he knew perfectly well that these limited materials were perfect for representing the smoke and coal dust filled factory landscapes of the English north west and he stayed with these materials for the vast majority of this well know works.

Take this image (Two Telegraph Poles) for example, like a lot of his drawings and painting there is little subject matter in them, if you compare these images to the paintings of LS. lowry, these landscape are empty. There are none of the hundreds of people all going about their activities.

All the art work is done here by empty views that contain some of the most moody drawings I think I have ever seen ….

Here is a full description of Trevor’s life and his working career ….

Grimshaw was born in Hyde, Cheshire in 1947 and studied at the Stockport College of Art from 1963 to 1968. He developed a unique style working in oils, charcoal and graphite to produce atmospheric, stylised images of the Northern industrial landscape, mainly in monochrome.

As a child he had a passion for steam engines and trainspotting, which continued into adulthood; for example he made the journey to the scrapyard at Barry in South Wales which held hundreds of steam locomotives awaiting scrapping, and made a personal photographic record of the occasion, 34 photo images being used in his publication “Stilled Life”. Much of his work overall features steam engines.

He spent much of his working career at Manchester advertising agency Stowe Bowden Ltd.[citation needed]

Grimshaw exhibited widely in the UK (including at the Royal Scottish Academy and the Royal Academy in the 1970s) and in the US and Germany. His work was included in the private collections of L.S. Lowry, Edward Heath (two drawings purchased in 1973), the Warburton (Bread) Family and Gerald Kaufman MP., and he is represented in a number of public collections, including The Tate Gallery, Salford Art Gallery, Stockport Art Gallery and Bury Art Gallery.

He illustrated The Singing Street, a book of poems by Mike Harding, and executed limited edition lithographs for Christie’s Contemporary Art. He also did the title slide images for the early BBC Great Railway Journeys of the World series. Artist Geoffrey Key described Grimshaw, a long time friend, as “one of the most important graphic artists working in the north during the last half of the 20th century”.[This quote needs a citation]

While Grimshaw is most celebrated for his black and grey graphite portrayal of post-industrial Britain (e.g. canals, cityscapes, viaducts, steam trains) his portfolio included diverse other subjects such as megaliths, Stonehenge, quarries in North Wales, motorway construction and the solstices (often in combination). Colour treatment was largely reserved for Cheshire landscapes, and pictures of Clarice Cliff ceramics.

L.S.Lowry attended one of his earliest exhibitions, buying three of his major early works to hang alongside his small collection of Pre-Raphaelites. Grimshaw became a regular visitor to Lowry’s home in Mottram.[citation needed] 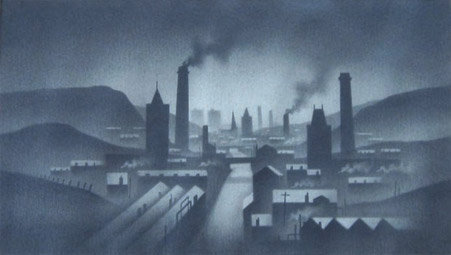 By the time of his death, in a house fire in November 2001, Grimshaw had become an alcoholic and a reclusive figure. He held his last show in 1997 in the County Museum and Art Gallery at Prostejov, Moravia, Czech Republic, his 50th show in his 50th year.[citation needed]

Grimshaw’s daughter organised a retrospective exhibition of her father’s work, which took place from February to May 2004 at Stockport Art Gallery.

In June 2014 an exhibition of his paintings, organised by family friend (and owner of the collection).

Ceridwen Grimshaw (Trevor’s youngest daughter) recently discovered negatives taken from Grimshaw’s 1970’s 3 trips to Barry Scrapyard (see above). Almost 100 of these images were unused and 90 will be exhibited at Stockport War Museum and Art Gallery from 11 May 2019 to June 15, titled “Trevor Grimshaw – Unseen Barry Photographs”. Grimshaw’s intention was to show the effects of Barry’s salt air on over 100 steam locomotives awaiting scrapping (although most were eventually saved).