The Voyages of Bran, A nine year voyage .

The Voyage of Brendan

The Voyage of Bran (Immram Brain) is a tale of a man’s journey across the sea to avenge his father’s murder. The content derives from Irish Mythology, but was written in the 8th Century.

Although there are many earlier references to the tale, one of the earliest preserved written versions of the legend is the 12th century Des Reis van Sint Brandaen (Dutch). Scholars believe it derived from a now lost middle High German text and combines Christian and fairy tale elements. It describes how a monk from Galway voyages for nine years, encountering the wonders and horrors of the world, such as Judas frozen on one side and burning on the other, people with swine heads, dog legs and wolf teeth carrying bows and arrows, and an enormous fish that encircles the ship by holding its tail in its mouth. The English poem Life of Saint Brandan is a later English derivative of the Dutch version.

As a genre, The Voyage of St. Brendan fits in with a then-popular form of literature, peculiar to Ireland, called an immram, which describes a hero’s series of adventures in a boat. For example, there appear to be similarities with The Voyage of Bran, written much earlier. The most commonly illustrated episode is his landing on an island that turns out to be a giant sea monster called Jasconius or Jascon. This too, has its parallels in other stories, not only in Irish mythology (Saint Brendan’s contemporary Saint Columba also met one) but in other traditions, from Sinbad the Sailor to Pinocchio. This style of storytelling meshed with a religious ascetic tradition whereby Irish monks would travel alone in boats, the same way their desert brothers used to isolate themselves in caves.

While it is generally assumed that the story is a religious allegory, there has been considerable ink spilled over the question of whether some parts of the story could have really happened. Christopher Columbus relied on the St. Brendan legends as part of his argument that it was indeed possible to travel to Asia by crossing the Atlantic. There is a St. Brendan Society that celebrates the belief that Brendan was the first European to “discover” America.

The Voyage of Bran

The Voyage of Bran (Immram Brain) is a tale of a man’s journey across the sea to avenge his father’s murder. The content derives from Irish Mythology, but was written in the C8th. Some Old Irish storyteller’s lists categorize the tale as an Echtra, or “Adventure”, but it contains the essential elements of an Immram, or “Voyage”. It may have influenced the story of Saint Brendan’s voyage later on.

See THE VOYAGE OF BRAN

In 1976, explorer Tim Severin built an ox leather curragh and over two summers sailed her from Ireland via the Hebrides, Faroe Islands and Iceland to Newfoundland to demonstrate that the saint’s purported voyage was feasible. On his voyage, he encountered various sights such as icebergs and sea animals such as whales and porpoises, which he suggests are factual counterparts to the fantastic sights from the legends of Brendan. See The Brendan Voyage, ISBN 0-349-10707-6. 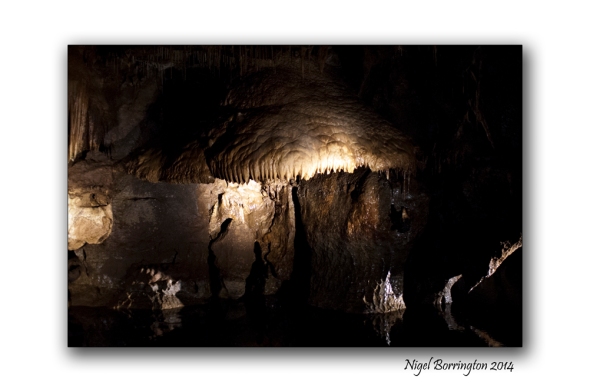 Oweynagat or the ‘Cave of Cats’ has to be one of the more unusual and unique sites in Ireland. The cave features a souterrain with a lintel supporting the entrance but then leads into a naturally formed cave. Oweynagat features heavily in Irish mythology, mainly because of its placement near Queen Medb’s fort which was at the center of the ancient Connaught capital of ‘Cruachan‘. The cave was said to be the actual birthplace of Queen Medb herself, the story goes that a goddess and fairy queen named Étain was fleeing her human husband with her fairy lover Midir. Midir wished to visit a relative named Sinech (meaning ‘large-breasted one’) who lived in the cave, the cave was said to be a great palace in the other-world and a maidservant named Crochan Crogderg (meaning ‘blood-red cup’) became enamoured with the place. She was granted the cave by Étian and it was here at Crochan gave birth to a daughter, Medb.

Another mention of the cave of the cats features one of Medb’s male servants Nera who had met a fairy woman in the cave and married her. His fairy bride warned that Medb’s palace would be burnt to the ground the following Samhain (November 1st) by creatures from the other-world , with this Medb stationed all her forces in the cave at Samhain to protect Cruachan from utter destruction.

The cave continued to be known as a place of power, acting as a portal to the other-world its power was extremely pronounced near Samhain as this was when the veil between the worlds lessened. Another story relates to the ‘Ellen Trechen’, this was a three headed monster that emerged from the cave and ravaged the local countryside before being killed by the Ulaid poet and hero Amergin.

As Christianity took hold in Ireland the belief in the cave being a ‘gateway to hell’ grew, an 18th century religious text describes Oweynagat as the ‘hell-mouth of Ireland’. It was believed that Oweynagat was linked to another ’hell-mouth’ many kilometres away at the Kesh Corran . 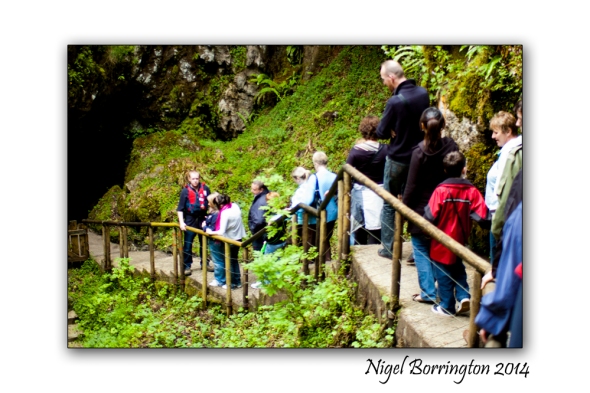 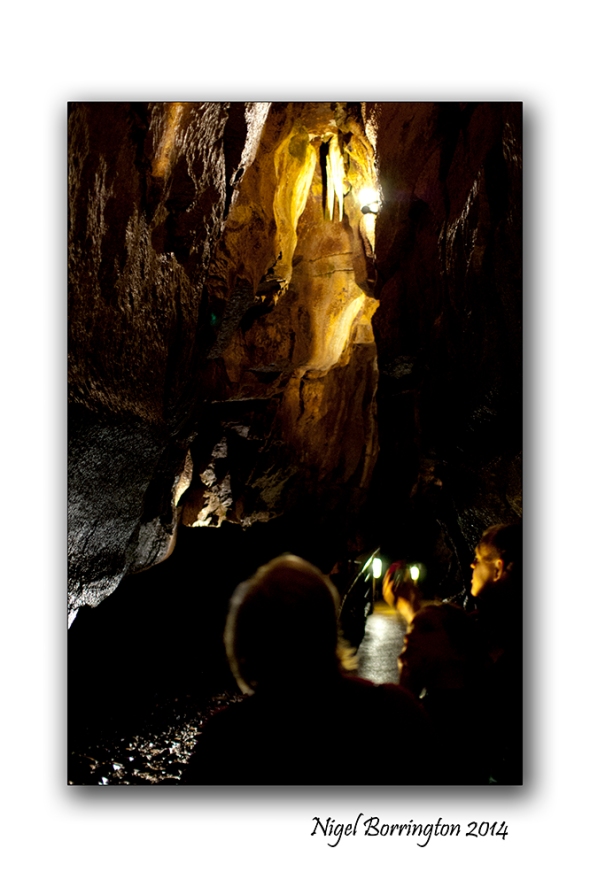 It was on a very wet October morning that we arrived at the giants causeway, its located just outside of the town of Bushmills, county Antrim, on the north Irish coast.

Its a national trust site so you have to pay a fee to get in to the area. Its a small walk from the visitors center to the causeway itself but its well worth it.

This is both a magical and mythical location and one of the worlds most geologically fascinating places.

I took the following images on the day and even though it was very wet and dull I think they get across the feeling you have when your walking around this site. I have added some information as the the geology and the myth’s associated with this truly wonderful place. 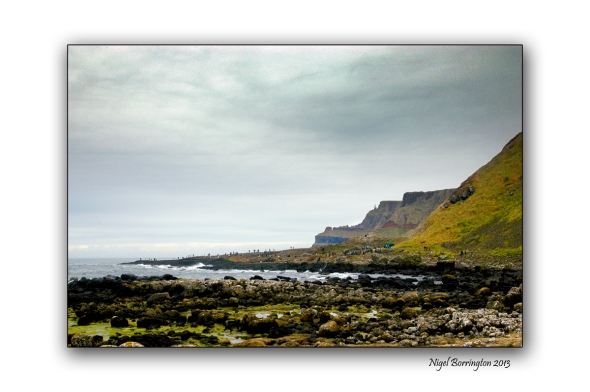 The Geology of the causeway

Giant’s Causeway, ( Irish: Clochán an Aifir) promontory of basalt columns along 4 miles (6 km) of the northern coast of Northern Ireland. It lies on the edge of the Antrim plateau between Causeway Head and Benbane Head, some 25 miles (40 km) northeast of Derry. There are approximately 40,000 of these stone pillars, each typically with five to seven irregular sides, jutting out of the cliff faces as if they were steps creeping into the sea.

Formed 50 to 60 million years ago, during the Paleogene Period, the Giant’s Causeway resulted from successive flows of lava inching toward the coast and cooling when they contacted the sea. Layers of basalt formed columns, and the pressure between these columns sculpted them into polygonal shapes that vary from 15 to 20 inches (38 to 51 cm) in diameter and measure up to 82 feet (25 metres) in height. They are arrayed along cliffs averaging some 330 feet (100 metres) in elevation. 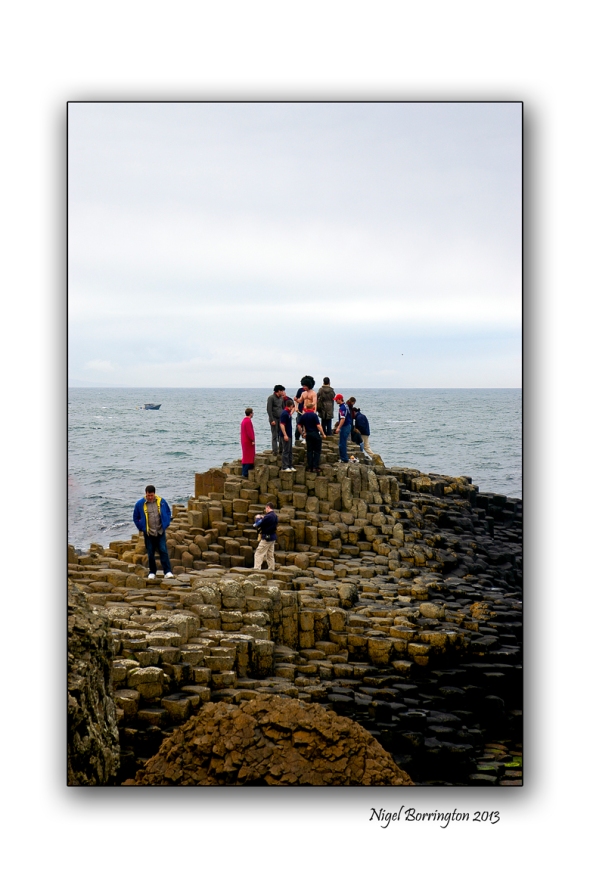 Myths behind the magic

Thanks to Kirribilli for this re-telling:

Long, long ago there lived a mighty warrior who was known across the length and breadth of Erin for his strength and bravery, no man on the island was his match and apart from repelling the hoards and the armies that attempted to invade our green land, being the best can be a bit boring and Fionn mac Cumhaill needed a challenge, he needed to prove to himself that he was the greatest warrior both on and off the island.

At that time the scourge of Scotland was a giant called Benandonner and on hearing tales of this beast of a man, Fionn knew that if he could beat this giant, his name would be known the world over. He made his way up to the Ulster coast, shouted across the water at Benandonner and challenged him to a fight.

Now normal people would take a boat and sail across the sea but not these two, they set upon ripping huge rocks out of the ground and throwing them into the sea separating Ireland from Scotland until after hours and days of back-breaking work there stretched a rocky causeway linking the two lands.

They’d agreed to fight between their two lands and seeing that bridge was complete, they made their way across the land bridge. As they approached each other it became apparent how big Benandonner really was, this wasn’t just a big man, this was a true giant.

Now Fionn was not a small man himself but the sheer size of the Scottish giant scared him, suddenly a fight with a monster like that wasn’t as appealing…

But not too far, once he was out of Benandonner’s sight he disguised himself as a baby, which was somewhat apt as he always had his best ideas when he sucked his thumb.

When Benandonner found the baby he asked it who its father was, he was told the baby was Fionn mac Cumhaill’s. When he heard this and saw the size of the baby, he imagined how big the father would be, he would be gigantic, he wouldn’t stand a chance, so he ran.

He ran back to the land of the Scots and on his way back he made sure to destroy the bridge, lest Fionn ever come looking for him…