Mining at Allihies started here in 1812 by John Puxley, a local landlord, after the large quartz promontory to the left here was identified as copper bearing as can be seen by its bright Malachite staining. Dooneen

Initial mining began with a tunnel or adit driven into this quartz lode from the pebble beach below. In 1821 two shafts were sunk as can be seen either side of the road here. Flooding was a continuous problem and in 1823 the engine house was erected to house a steam engine brought over from Cornwall to pump water from the depths. The remains of this building with the base of the chimney can be seen across the road. There is also evidence of a steam powered stamp engine to the left of the chimney and dressing floors in front of the engine house. The high dam further inland is the remaining evidence of a water reservoir which stored the water that was pumped out from the bottom of the mine. It was used for the steam engines and needed to separate the copper from rock. All the rubble on the cliff at the sea side of the road is the crushed useless quartz rock left over after the copper ore was extracted.

This is one of six productive mines in the Allihies area and continued its operation until 1838 when it closed due to failing ore.

John Puxley died in 1860 and in 1868 his son Henry Puxley sold the mines to the new Berehaven Mining Company who reopened the mine and installed a new 22 inch steam engine in 1872. Little ore was produced though in this period and the mine was finally abandoned in 1878. 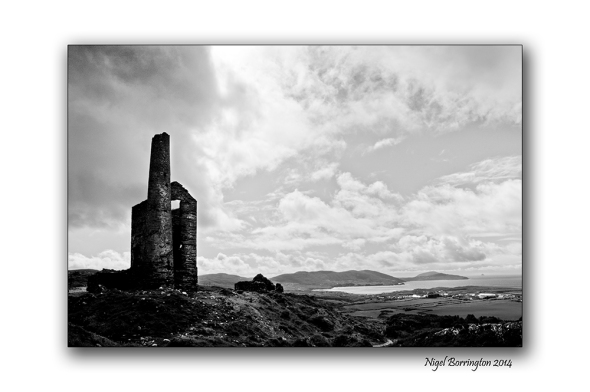 Coom Mine was the last mine to be opened in the Allihies area having been opened in 1870 by the new Berehaven Mining Company who had recently bought the mines from Henry Puxley in 1868.

Two shafts were sunk and the engine house erected to house a 28 inch cylinder steam engine. The site was known as Bewley’s after the Dublin family who were board members of the Berehaven Mining Company.

The working in the mines was dangerous. A Mine Captain reports:

“On the 13 inst. we had a man killed by falling out of the whim bucket in the whim shaft (winding shaft), he fell 72 feet and was killed immediately. … The whim bucket was coming up and he was rather late to get into it, when he laid hold of the edge of it with his fingers and was drawn up nearly to the top in that manner but was obliged to let go at last and fell to the bottom of the shaft. … He was a very able young man – this day we intended to carry him across the mountain to Castletown a distance of 7 miles to have him interred but the weather is so bad with a fall of sleet and snow that it was not possible. … We hope to do the last for him tomorrow.”

In 1917 a further attempt to extract ore was made by Allihies Copper Mines Ltd. which proved fruitless.

Coom Mine proved not to be a very productive mine. It had only produced 70 or 80 tons of ore when it closed in 1882.