The Children of Lir

The Children of Lir Irish story – Long ago there lived a king called Lir. He lived with his wife and four children: Fionnuala, Aodh, Fiachra and Conn. They lived in a castle in the middle of a forest. When Lir’s wife died they were all very sad. After a few years Lir got married again. He married a jealous wife called Aoife.

Aoife thought that Lir loved his children more than he loved her. Aoife hated the children. Soon she thought of a plan to get rid of the children.

She went back to the castle and told Lir that his children had drowned. Lir was so sad he started crying. He rushed down to the lake and saw no children. He saw only four beautiful swans.

One of them spoke to him. It was Fionnuala who spoke to him. She told him what Aoife had done to them. Lir got very angry and turned Aoife into an ugly moth. When Lir died the children were very sad. When the time came they moved to the Sea of Moyle.

Soon the time came for their final journey. When they reached Inish Glora they were very tired. Early one morning they heard the sound of a Christian bell. They were so happy that they were human again. The monk (some even say it was St. Patrick himself) sprinkled holy water on them and then Fionnuala put her arms around her brothers and then the four of them fell on the ground. The monk buried them in one grave. That night he dreamed he saw four swans flying up through the clouds. He knew the children of Lir were with their mother and father. 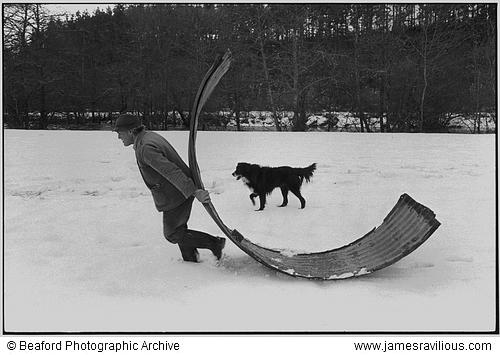 Who was James Ravilious ?

“James Ravilious was an English photographer born in Southern England in 1939. He was the son of the artist Eric Ravilious and studied art himself at St Martin’s School of Art in London. James Ravilious took up photography in the early 1970′s, teaching himself, and he is most famous for his work for the Beaford Archive. The Beaford Archive was started in 1971 by Roger Deakins and was built into a collection of more than 80,000 images by Ravilious between 1972 and 1989 documenting rural life in North Devon. Ravilious’ photographs feature many everyday activities over the seventeen year period and provide a very interesting historical documentary about disappearing ways of life in rural England. James Ravilious was awarded Honorary Membership of the Royal Photographic Society as recognition of his contribution to photography in 1997. Ravilious died in 1999. His images are largely black and white and taken on film. By spending so much time with the inhabitants of the area and over such a long period of time Ravilious has managed to capture very natural looking images, as though he weren’t there in many of them or with the subject looking comfortable. From a single photograph his images all tell a story. His photographs include little objects or daily events that build a picture of their way of life. From each one you can imaging the scenario and more than just the moment at time when the image was shot. By shooting all year round his images also capture the moods of the seasons and the traditions of the year.

Images such as the one of John Bennett the traveller. The image captures the warmth of the season, and by including all of his belongings within the frame tells you lots of things about Mr Bennett’s lifestyle. You can pick out his walking stick, his boots, his pans and this all creates images within your head of Mr Bennett walking along a country lane with his belongings on his back, or perhaps cooking at the side of a stream. The image tells much more than a man lying on the grass in the sun.”

I like James work very much, A photographers lifetime in his work….

You see a great video on James work here:

A shot taken at a wedding I photographed in Langton House Hotel, Co Kilkenny