In January , I spend sometime capturing images of a family of otters on the river Suir, county Tipperary, this was great fun and one of the highlights of the year for my own nature photography.

The Otter, By :Seamus Heaney

When you plunged
The light of Tuscany wavered
And swung through the pool
From top to bottom.

I loved your wet head and smashing crawl,
Your fine swimmer’s back and shoulders
Surfacing and surfacing again
This year and every year since.

I sat dry-throated on the warm stones.
You were beyond me.
The mellowed clarities, the grape-deep air
Thinned and disappointed.

Thank God for the slow loadening,
When I hold you now
We are close and deep
As the atmosphere on water.

My two hands are plumbed water.
You are my palpable, lithe
Otter of memory
In the pool of the moment, 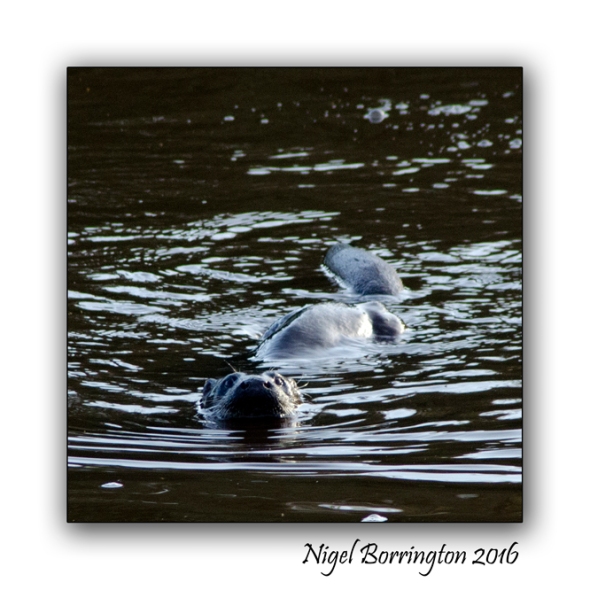 Turning to swim on your back,
Each silent, thigh-shaking kick
Re-tilting the light,
Heaving the cool at your neck.

And suddenly you’re out,
Back again, intent as ever,
Heavy and frisky in your freshened pelt,
Printing the stones.

A weekend with wildlife, Otters of the river Suir

My study of an Otter family on the river Suir, county Tipperary continued today Friday, Each time I visit this family I manage to get closer and closer, today being the most noticeable.

I managed to spend 40min with this one adult Otter as he or she hunted the river for fish, this process involved diving as deep as possible and spending about a minute below the water before coming back up for breath, during the 40 minutes I think two fish in total were retrieved.

I hope to keep returning many times of the winter months to monitor just how they are all doing, ist amazing to be able to get so close and exciting to study such wonderful wild animals. 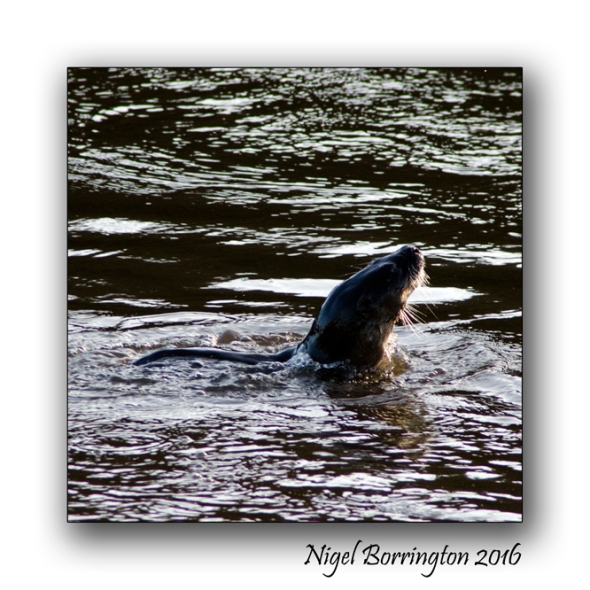 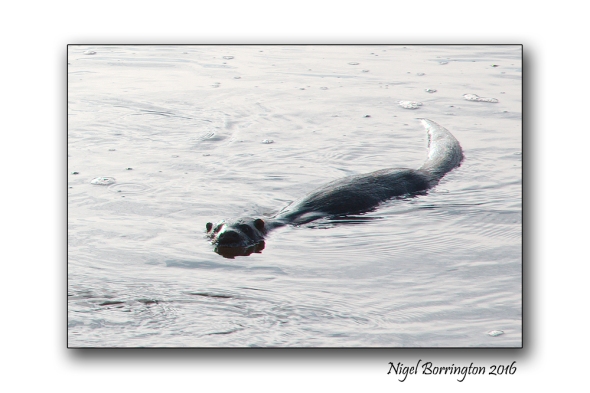 Last weekend while on walk between Clonmel and Carrick-on-suir, both in county Tipperary, We came across a family of Otters, they had made one of the rivers contributor’s their home ( A Holt or Couch in otter terms ). We spent about an hour with them watching as two adults and four pups hunted and play in the waters. One of the Pups managed to catch a fish and then share this food with the other three pups on the river bank.

For a long time I have hopped to have an encounter with these otters, I knew they were around this location but had never been in luck when it came to seeing them, so this hour was a truly special time and one I will not forget 🙂 , it changes the way you feel about a river when you have the chance to view its wild life for such a long period of time.

Here are some basic facts about the otter in Ireland …..

The otter (Lutra lutra) is regarded as one of Ireland’s most charismatic native mammal species.

The otter is highly secretive and although widespread people tend to only get rare glimpses of the species in the wild. Otter populations declined throughout Europe after the 1960s and the species is now very rare or absent from many parts of its former range. The Irish otter population appears to have remained largely stable and is regarded as a European stronghold. In Ireland otters are found in a diverse array of aquatic habitats, from small streams to major rivers, upland lakes to coastal lagoons and sandy beaches. However, otters that live at the coast do need access to some freshwater habitat to bathe. Within these habitats otters feed on a range of both aquatic and terrestrial prey. Much of the information regarding distribution, habitat use and diet comes from spotting otter tracks and signs. Individual otters are highly territorial, using droppings called spraints to mark their home ranges. Favoured locations for leaving spraints are in-stream boulders, bridge footings and grass tussocks, these are called seats. These territorial signs are an ideal way to tell if otters are using an area. Within its territory an otter may have a number of resting sites, called couches and underground denning sites called holts, which can be a considerable distance (up to 1km) from a river, lake or the seashore.

The species of otter that occurs in Ireland is called the Eurasian otter and is found in Europe and across Asia to China and Japan. In other regions the otter shares aquatic habitats with species specialised to different habitats such as sea otters, but in Ireland the otters that live at the coast and those that occupy our rivers are the same species.

In Ireland the otter population is geographically widely spread. In local areas its presence will depend on the provision of suitable aquatic habitats, sufficient food and cover for resting and breeding. During different seasons male otters and juvenile otters will disperse and otter signs may be observed in areas where they have not been present hitherto.

Within their territories an individual otter may utilise a number of holts. These tend to be natural crevices, associated with the roots of trees growing along river and lake banks. These natural recesses provide the otter with a holt that has multiple entrances from which the otter can escape if disturbed. Whilst individual otters rarely dig their own holts they will use burrows made by other animals such as rabbits and foxes. It is possible to build artificial holts to attract otters to use certain areas. Artificial holts are built to resemble natural holts, with a resting compartment and multiple entrances, these are particularly important where the natural bank side vegetation has been removed.

Other resting sites are also used, frequently in dense vegetation and may be associated with frequently used runs and slides into the water.

Although otters can breed at any time of year most seem do so in spring or early summer. Scent markings by the females signal to male otters that the females are ready to mate. The pregnancy lasts for around two months after which a litter of cubs is born, usually two or three, but as many as five have been seen. The cubs remain in the natal holt for up to two months before venturing out on their own, although the mother may move the cubs between holts within her territory periodically. Unlike other resting sites the natal holts do not tend to be marked with spraints. The juvenile otters remain as a family group for around six months or longer before the young otters disperse to establish their own territories.

Otters that live in rivers and lakes tend to be completely nocturnal, described as being crepuscular – activity peaks at dusk and dawn. Foraging at night or in ‘muddy’ water is aided by their highly sensitive whiskers, which detect their prey items. Otters are principally piscivorous, relying predominantly on salmonids (salmon and trout), but also eel and small fish species such as stickleback. However, otters are not limited to fish and feed opportunistically on a range of prey when available: frogs are frequently eaten by otters, and the remains of invertebrates (crayfish), birds and small mammals have also been found in spraints. Otters that forage at the coast may have flexible foraging times linked to the tides. At low tide otters hunt in the exposed rock pools and seaweed covered rocks for fish and invertebrate prey.

The Irish otter population remains one of the most stable in Europe. There is some evidence to suggest that since initial national surveys in the early 1980s there have been declines in the prevalence of the species. It is hoped that the reasons for these declines will be addressed by the designation of Special Areas of Conservation (SACs), ongoing national assessments and by targeted intensive surveys. The risks to the current otter population are the availability of sufficient food within their habitats and provision of resting and denning sites. This species is protected under the Wildlife Act (1976) and Wildlife (Amendment) Act 2000.

Otters have been found dead in illegal snares, which may not be intended for otters, but which still pose a threat to individual animals. A significant number of otters are also killed on our roads. There is some evidence that the incidence of these accidents increases during periods of flooding when fast flowing rivers at bridge crossing become impassable and otters must venture onto roads to find alternative routes. The occurrence of otters at any site relies on a complex interaction of the characteristics of the wider landscape and local site specific habitat factors. Broad-scale intensive agriculture and urbanisation of catchments reduces the likelihood that otters will occur, along with reduced diversity of river banks and lake shores. Maintaining prey populations and preserving the natural features of rivers, lakes and coasts will benefit the Irish otter population and ensure that the Irish population remains a European stronghold.