For me leonara Carrington is one of histories great Artists, Personally and I feel the best female artists of all time(IMO), although correctly she fought all her life again the label of “Female Artist” and just wanted to be call an ARTIST period !

Her work should be much better known and would be so but for a few facts , she was producing art at the same time as some the now best known European artist, who would later become house hold names but also she lived and worked during the Nazi period of European Art theft and art control, because of this she ended up in the end making her home in Mexico in a period when no one took anyone not working in Europe or America seriously.

In 1936, Leonora saw the work of the German surrealist Max Ernst at the International Surrealist Exhibition in London and was attracted to the Surrealist artist before she even met him. In 1937, Carrington met Ernst at a party held in London. The artists bonded and returned together to Paris, where Ernst promptly separated from his wife. In 1938, leaving Paris, they settled in Saint Martin d’Ardèche in southern France.

With the outbreak of World War II Ernst, who was German, was arrested by the French authorities for being a “hostile alien”. With the intercession of Paul Éluard, and other friends, including the American journalist Varian Fry, he was discharged a few weeks later. Soon after the Nazis invaded France, Ernst was arrested again, this time by the Gestapo, because his art was considered by the Nazis to be “degenerate”. He managed to escape and, leaving Carrington behind, fled to America with the help of Peggy Guggenheim, who was a sponsor of the arts.

After Ernst’s arrest, Carrington was devastated and fled to Spain. Paralyzing anxiety and growing delusions culminated in a final breakdown at the British Embassy in Madrid. Her parents intervened and had her hospitalised. She was given “convulsive therapy” and was treated with the drugs cardiazol, a powerful anxiolytic drug (eventually banned by some authorities, including the US Food and Drug Administration (FDA)), and Luminal, a barbiturate. After being released into the care of a nurse who took her to Lisbon, Carrington ran away and sought refuge in the Mexican Embassy. Meanwhile, Ernst had married Peggy Guggenheim in New York in 1941. That marriage ended a few years later. Ernst and Carrington never resumed their relationship. 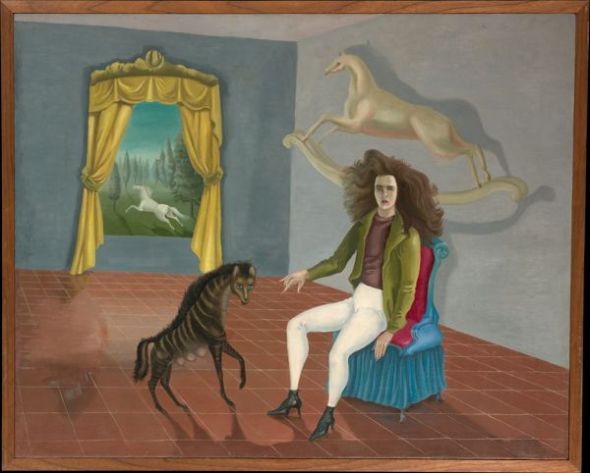 In 1939, Carrington painted a portrait of Max Ernst, as a tribute to their relationship. The portrait was her first Surrealist work, and it was called The Inn of the Dawn Horse. It is now in the Metropolitan Museum of Art. The person in the painting is a cross between a male and a female, who is seated in a room with a rocking horse on the wall.

She also painting this portrait with him as the main character ..

From the very first time I viewed Leonara’s art works I was captivated, her paintings are full of mystery and magical subjects, without falling into more traditional and classical mythological stories.

I found myself wanting to understand more about the fantasy world that her painting capture, a world of hidden meanings, I still don’t fully understand and here in this video she tells us not of over analyses art and just to enjoy living in the moment. However just looking at her creations you know she must have held many stories in her mind, I will keep looking and discovering!

(6 April 1917 – 25 May 2011) was an English-born Mexican artist, surrealist painter, and novelist. She lived most of her adult life in Mexico City, and was one of the last surviving participants in the Surrealist movement of the 1930s. Carrington was also a founding member of the Women’s Liberation Movement in Mexico during the 1970s. 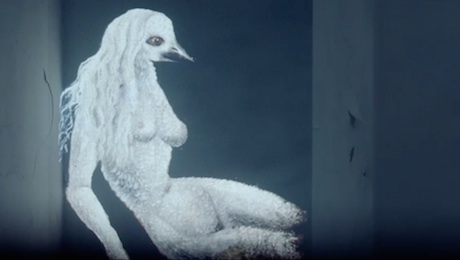 Looking at many of her painting you can clearly see that her life and work is the source for the movie Pan’s Labyrinth, Director: Guillermo del Toro, Writer: Guillermo del Toro , set in the falangist Spain of 1944, about a bookish young stepdaughter of a sadistic army officer escapes into an eerie but captivating fantasy world, the very same kind of fantasy worlds Leonora Carrington imagined and reflected on in her work.

The best surrealist movie of all time 🙂

Leonora Carrington – Imagination is everything !!!