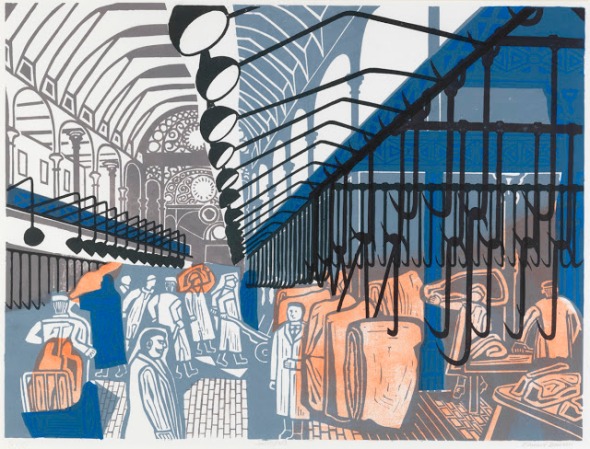 Back in the Summer I did a weeks worth of posts that related to some of the artists I like the most. I really enjoyed doing the research behind these posts and so I want to start looking at some more artists and their work , In the long term I am planning to put each Friday aside for these posts, this December however I may post a lot more than one day per week, as I want to dig a lot deeper into the subject of landscape and cityscape art and artists ……

British Artist Edward Bawden, one of a group of artists associated with a community of artists that existed around Great Bardfield in Essex, England during the middle years of the 20th century.

is a village in north west Essex, England. The principal artists who lived there between 1930 and 1970 were John Aldridge RA, Edward Bawden CBE RA, George Chapman, Stanley Clifford-Smith, Audrey Cruddas, Walter Hoyle (principally a printmaker, who ran the printing workshops at Cambridge Art School when I was there, and taught me to do linocuts in the style of Bawden and himself), Eric Ravilious, Sheila Robinson, Michael Rothenstein, Kenneth Rowntree and Marianne Straub. Other artists associated with the group include Duffy Ayers, John Bolam (who taught me painting at Cambridge Art School, and later became the Principal of the school), Bernard Cheese, Tirzah Garwood, Joan Glass, David Low and Laurence Scarfe. Great Bardfield Artists were diverse in style but shared a love for figurative art, making the group distinct from the better known St Ives art community in Cornwall, who, after the war, were chiefly dominated by abstractionists.

can be seen as a key artist in the Bardfield group. His long career spanned most of the twentieth century, and comfortably straddled boundaries and borders between the fine and applied arts, boundaries which are seen as so immovable today. Even before his appointment as an Official War Artist in 1940, Bawden had established a reputation as a designer, illustrator and painter. As well as these areas his output over the years include murals, posters, designs for wallpaper, ceramics, lithographic prints and watercolours.

Edward Bawden was born in Braintree, Essex in 1903, and was perhaps more firmly rooted in Essex than any other artist represented in the North West Essex Collection. Bawden attended the Friends’ School in Saffron Walden. At the age of eleven he strained his heart and was excused participation in sports. This may have allowed him to devote more time to drawing, and his portraits and caricatures attracted the attention of his tutors who arranged for him to spend a day a week at the Cambridge School of Art. The school, now part of Anglia Ruskin University, had been founded to comply with the Ruskinian philosophies of improving design for industry, and encouraging amateur aspirations. Bawden fitted perfectly.

Before long, he had gained entry to the Royal College of Art. Here he was taught by Paul Nash (a lasting influence on Bawden and his contemporaries), and the popular E. W. Tristram. It was at the RCA that Bawden first met his ‘kindred spirit’, Eric Ravilious, the two quickly becoming firm friends, though entirely different in temperament. Shortly after leaving the college, the pair gained a prestigious commission to paint a mural for the refreshment room of Morley College in London. He first rented half of Brick House, the imposing Georgian house in Great Bardfield in the mid-1920s with Ravilious, and after his father purchased the whole house for him on his marriage to Charlotte Epton in 1932, he continued to live there until moving to Saffron Walden in 1970 after Charlotte’s death.

I really like Edwards London market prints, his use of limited colour and strong geometric shapes, to me this is print making at its very best. They are almost poster like yet retain strong connections to art not commercial based prints.

I like very much the sense of movement and activity that he captures from the people he includes in these prints, you can almost hear the noise and imagine the chatter that is taking place, the sound of wheels on the flag stones. The cold in the winter and the heat of the city in the summer.

In 1967 Bawden made a series of six prints of London markets, commissioned by Curwen Prints. The markets were Billingsgate, Borough, Covent Garden (2), Leadenhall and Smithfield: 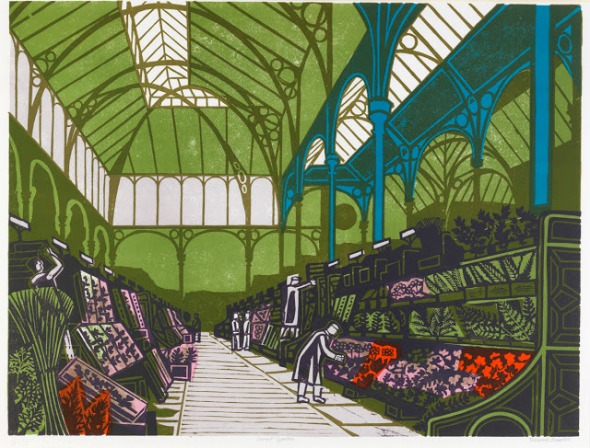 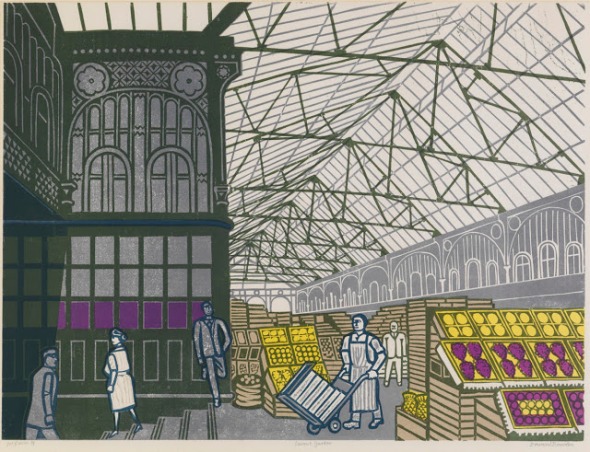