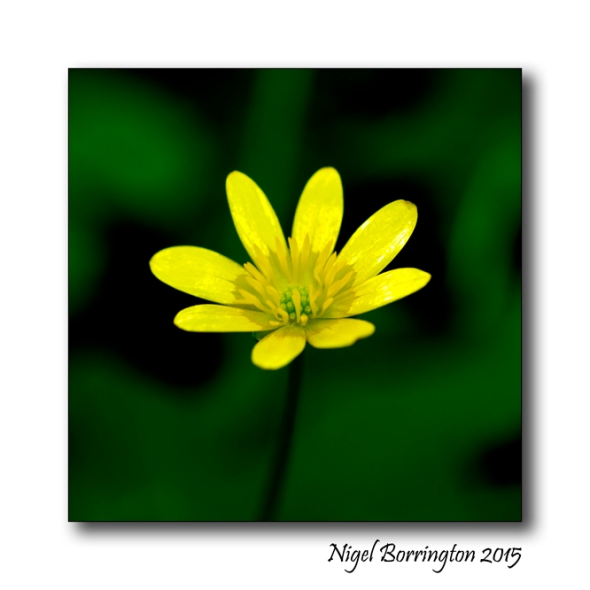 Its so easy to just walk past some of natures smaller Herbs and Flowers, however I guess that some flowers cannot help but get themselves noticed.

“Celandine, Lesser” is one of these little gems, its strong yellow flowers in the early summertime cannot help but get noticed as you walk down woodland paths or along the road sides.

Here are a many details about this wild Herb and it flowers:

—Synonyms—Small Celandine. Figwort. Smallwort. Pilewort.
—Part Used—Herb.
—Habitat—The Lesser Celandine, one of the very earliest of spring flowers, its cheery, starlike blossoms lighting up our hedges even before winter is quite spent, is distributed throughout Europe, Western Asia, and North Africa, in these islands, growing up the hillsides in Wales to a height of 2,400 feet. It grows in moist corners of fields and places near watersides, but is found also on drier ground, if shady, being one of the few plants that thrive beneath the shade of trees, where its glossy foliage frequently forms a dense carpet.

Wordsworth, whose favorite flower this was (in recognition of which the blossoms are carved on his tomb), fancifully suggests that the painter who first tried to picture the rising sun, must have taken the idea of the spreading pointed rays from the Celandine’s ‘glittering countenance.’ The burnishing of the golden petals gives a brilliant effect to the flowers, which burst into bloom about the middle of February, a few days only after their bright, shining leaves. The leaves are on long stalks, arising from a short, prostrate stem, and are very variable, the first being heart-shaped, the later ones bluntly cut into, somewhat like the ivy. They often have dark markings.

The blossoms shut up before rain, and even in fine weather do not open before nine o’clock, and by 5 p.m. have already closed for the night. The Celtic name of the plant, Grian (i.e. the sun), refers to this habit. The petals are green on the underside, and directly the flowers close they become inconspicuous.

Throughout March and April, this cheerful little plant is in full bloom, but as the spring passes into summer, the flowers pale somewhat, and the whole plant looks rather sickly, the warmth of the lengthening days withdrawing from it the needed moisture. By the end of May, no flowers are to be seen, and all the plant above ground withers and dies, the virtue being stored up in the fibres of the root, which swell into the form of tubers. If the plant is dug up, late in the summer or autumn, these tubers are seen hanging in a bunch, a dozen or more together, looking like figs, hence the plant’s specific Latin name ficaria, from ficus (a fig). By these tubers, the plant is increased, as they break off readily, each tuber, like a potato, producing a new plant. To eradicate this plant from any ground, it is necessary to remove the roots bodily, for if the plants are dug into the soil, they work their way up to the surface again, the stems branching as they grow upward from the tubers, and at every branch producing fresh tubers.

The early awakening of the plant is due to these fully-stored tubers, which lie quiescent all the summer and autumn, but all necessary materials being at hand, leaves and flowers are quickly pushed upwards directly the depth of the winter has passed.

Although the Lesser Celandine has been placed by some botanists in a distinct genus, when it is called Ficaria verna, it is more generally assigned to the Buttercup or Crowfoot genus, Ranunculus. The name of this genus, first employed by Pliny, alludes to the damp and marshy localities preferred by the plants of the family, Rana, being the Latin for a frog, whose native haunts are those of the majority of this group of plants. The Lesser Celandine is distinguished from the Buttercup by having nine or ten, even sometimes a dozen narrow petals, instead of five, and only three sepals (the outer, generally green leaves of the flower), which fall off on opening, instead of the usual five, which remain after the flower has expanded, in the other species of Ranunculus. The flowers rise singly from the root, on long, slender, leafless stalks and are about 1 inch in diameter. There are a number of stamens. The fruits are not unlike those of the Buttercups being dry and distinct, set together in a globular head, somewhat like a grain of corn and whitish in colour, but comparatively few fertile seeds are produced.

The flowers would originally appear to have been designed with the object of attracting insects for their fertilization, the bright coloured, burnished petals having honey sacs at their base, but the flowers can face colder days than the insects can, for whom the honey has been provided, blooming when few of the insects have emerged, with the result that comparatively few become fertilized in this country and not many seeds are produced. The plant, therefore, has recourse to another method of reproduction, independent of all external aid. At the point where the upper leaves join the stem are to be seen little objects like minute round tumours, which grow about the size of a grain of wheat. In the early summer, when the leaves and stems are dying down, these grains become loose and drop to the ground. Each is capable of producing a new plant. A heavy rain will sometimes wash them from the plants in every direction. Kerner, in his Natural History of Plants, tells us that:
‘a sudden downpour of rain in a region abundantly overgrown with Lesser Celandine is sufficient to float away numbers of the tubers, and heap them up on the borders of irrigation channels when the rain disperses. In such places the quantity of tubers which have floated together is often so large that one can hardly gather them in one’s hands. In this way arose the idea that the tubers had fallen from heaven with the rain and the myth of a rain of potatoes.’

This fact probably accounts, also, for the ‘rains of wheat’ sometimes vouched for by country people in various parts. These bulbils (i.e. Iittle bulbs) are only produced on those plants whose fruits have failed to set.

The root of the Lesser Celandine is perennial.

Seedlings do not flower in their first year, but collect and store up material to start their accustomed course at the end of the ensuing winter.

The whole plant is glabrous.

It is called the Lesser Celandine to distinguish it from the Greater Celandine, to which it has neither relationship nor similarity, except in the colour of its flowers, though the older herbalists applied the name to both plants indiscriminately. The confusion of names existed in Gerard’s time, for he published a list of all the plants in cultivation in his garden on Holborn Hill – to wards the close of the sixteenth century and introduced in it, under the same name, both this and the Greater Celandine (Chelidonium majus) which certainly is in bloom when the swallows arrive, and continues to flower the whole summer, and so would have more right to the name Celandine than this species, which blossoms long before they come, and dies down months before they leave our shores.

A figure of the Lesser Celandine – under the name of Erdöpffel – appears in an old German Herbal of 1533, Rhodion’s Kreutterbuch, evidence that this plant was well known to the herbalists of the Middle Ages.

It is also called ‘Small-wort.’

The old English name of Pilewort is due to the fact that it has long been considered a cure for piles, one of the reasons assigned for this resting on the strange doctrine of signatures. We are told by an old writer: ‘If you dig up the root of it you will perceive the perfect image of the disease commonly called the piles.’ Gerard writes of it:
‘It presently, as Galen and Dioscorides affirm (though this perhaps refers to the Greater Celandine) exulcerateth or blistereth the skin: it maketh rough and corrupt nails to fall away. The juice of the roots mixed with honie and drawn up into the nosthrils purgeth the head of foul and filthy humours. The later age use the roots and graines for the piles . . . there be also who think that if the berbe be but carried about one that hath the piles, the pain forthwith ceaseth.’

Culpepper, writing fifty years later, tells us:
‘It is certain by good experience that the decoction of the leaves and roots doth wonderfully help piles and haemorrhoids; also kernels by the ears and throat called the King’s Evil, or any other hard wens or tumours.’

He had such faith in the virtues of this little plant that he further tells us, with more definite belief than Gerard: ‘The very herb borne about one’s body next the skin helps in such diseases though it never touch the place grieved.’

The young leaves, the substance of which is soft and mucilaginous, have sometimes been boiled and eaten as a vegetable in Sweden, but have not the reputation of being very palatable, either thus treated or raw as a salad.

Linnaeus advised farmers to eradicate the plant from their land on account of it being disliked by cattle (though wood-pigeons eat it with avidity), also for its injurious effect on other herbs in the meadow, but there seems little ground for this assumption, as although the tissues of most plants in this order contain acrid juices to a high degree, the acrimony of the Lesser Celandine is of a very mild character. A dressing of coal or wood ash is said to effectually destroy the whole plant.