During last weekend we visited Fota wildlife park in county cork and spent many great hours getting to know many of the animals they have in their care.

Here are some details and fact about them , just to help you get to know them a little better 🙂

About the Siamang Gibbon

With a Latin name that means ‘Dweller in the trees’, the Siamang Gibbon is a tailless, black-furred ape that can grow to be twice the size of other Gibbons. Like other apes, the Siamang Gibbon has quite an upright posture and well-developed brain. However, it can weigh up to 14kg and has a special throat sac to amplify its call, which can be heard up to two miles away in the forest canopy.
Habitat

Native to the forests of Sumatra, Malaysia and Thailand, its home range overlaps with both the Lar and Agile Gibbons 0 though because of its largely leaf-eating habits, it does not compete for what the forest has to offer the other species.

Siamangs are very agile and acrobatic creatures and their extra-long arms help them swing up to 15 feet in one move. Its arms stretch out to help with balance while walking and because it uses its hands so frequently while traveling, the Gibbon tends to carry items with its feet.

Siamang Gibbons are considered to be Endangered as 70-80% of their primary habitat has been lost to palm oil production in recent decades. The illegal pet trade has also taken a toll on wild populations, but there are a growing number in existence in captivity across the world.

The Siamang Gibbon mates for life with both parents playing a role in rearing offspring. Breeding males and females also sing duets in order to maintain their bond and establish territory boundaries.

As a fellow ape, the Siamang is also the closest related animal to Mankind in the Park.

One of the noisiest crews in the Park, the Siamang Gibbons are hard to ignore and have been at Fota right from the beginning.

They feed on fruit, vegetables, nuts and willow branches and can often engage in long bouts of calling out if the Park is busy and they feel their territory might be under threat. Situated on Monkey Island, their location allows visitors get right up close. 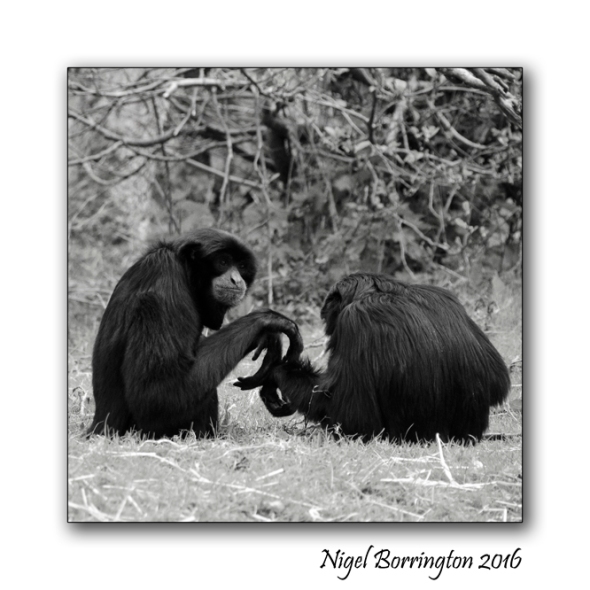