Blue flowers , they stands for desire the infinite and unreachable 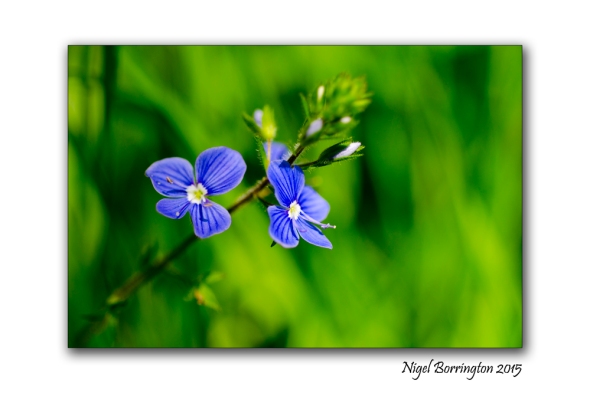 Blue flowers must be one of the hardest types of wild flowers to find, these Field-Speedwell’s are just some of a few we have in our local woodlands.

Blue in nature has been used as a powerful symbol, the following uses are just a few …..

A blue flower is a central symbol of inspiration. It stands for desire, love, and the metaphysical striving for the infinite and unreachable. It symbolizes hope and the beauty of things.

Early use of the symbol of blue flowers

Explanation of the symbol of blue flowers

In the book Heinrich von Ofterdingen the blue flower symbolises the joining of human with nature and the spirit so the understanding of nature and coincident of the self is growing. In the Romantic the meaning of human was a continuation from Humanism and the Age of Enlightenment, but the focus was on the own emotions not on abstract theory. Understanding and thinking rise in the comprehension of Romantic from own individual love. Feeling is based on the self, thinking is based on the self and the development of the self leads the individual person. Also very important is contemplation. About the feeling, the thinking and contemplation personal inward cognition is possible. The process of cognition merge again with own individual love. The self and the nature is in this theory always linked.

Use of the symbol

Joseph Freiherr von Eichendorff wrote a poem called Die blaue Blume (The blue flower). Adelbert von Chamisso saw the core of Romanticism in the motif, and Goethe searched for the “Urpflanze” or “original plant” in Italy, which in some interpretations could refer to the blue flower. E. T. A. Hoffmann used the Blue Flower as a symbol for the poetry of Novalis and the “holy miracle of nature” in his short tale “Nachricht von den neuesten Schicksalen des Hundes Berganza”.

In 1902, Charles Scribner’s Sons published “The Blue Flower”, a collection of short stories by Henry Van Dyke, the first two of which, “The Blue Flower” and “The Source” refer to the blue flower as a symbol of desire and hope, and the object of the narrator’s search. This volume also includes Van Dyke’s most famous story, “The Other Wise Man”.
Blue rose

Walter Benjamin used the image of the blue flower several times in his writing. For example the opening sentence of his essay Dream Kitsch: “No one really dreams any longer of the Blue Flower. Whoever awakes as Heinrich von Ofterdingen today must have overslept.” Also in his Work of Art essay: “The equipment-free aspect of reality has here become the height of artifice, and the vision of immediate reality the Blue Flower in the land of technology.”

C.S. Lewis, in his autobiographical book, Surprised By Joy, references the “Blue Flower” when speaking of the feelings of longing that beauty ellicited when he was a child of six. He associates it with the German word sehnsucht, and states that this intense longing for things transcendent made him “a votary of the Blue Flower.”

English writer Penelope Fitzgerald’s historical novel The Blue Flower is based on Novalis’s early life. In John le Carré’s 1968 novel A Small Town in Germany, the character Bradfield says, “I used to think I was a Romantic, always looking for the blue flower.” (Pan edition, p. 286 – chap. 17) Substance D, a fictitious drug in Philip K. Dick’s 1977 novel A Scanner Darkly, is derived from a plant with blue flower.

Tennessee Williams used images of blue roses in his play, The Glass Menagerie, to symbolize the frailty and uniqueness of Laura, a central character that reflects the life of Williams’ sister, who underwent a lobotomy. In the play, Laura is nicknamed “Blue Roses” after another character misheard her say “pleurosis”.

In his fantasy series A Song of Ice and Fire, American author George R. R. Martin uses the blue flower as a reoccurring symbol to represent young women of the noble House Stark, often with hints to an illicit love affair. In one instance, Prince Rhaegar Targaryen uses blue winter roses to crown the Lady Lyanna Stark as the “Queen of Love and Beauty” at the Tournament of Harrenhal, passing over his own wife, Princess Elia of Dorne.

“Blue Flower” is the name of a song by the British avant-garde pop band of the early 1970s, Slapp Happy, later covered by the 1990s indy rock bands Pale Saints and Mazzy Star. “Blue Flowers” is a song by the alternative MC, Kool Keith (AKA Dr. Octagon), on his 1996 album, Dr. Octagonecologyst.

This entry was posted on May 13, 2015 by nigel borrington. It was filed under Gallery, irish woodlands, Landscape, Nature and Wildlife, Plants and herbs and was tagged with Blue flowers, Colour blue, colour symbols, flowers, Nature, nature and wildlife, Nature photography, Nigel Borrington.