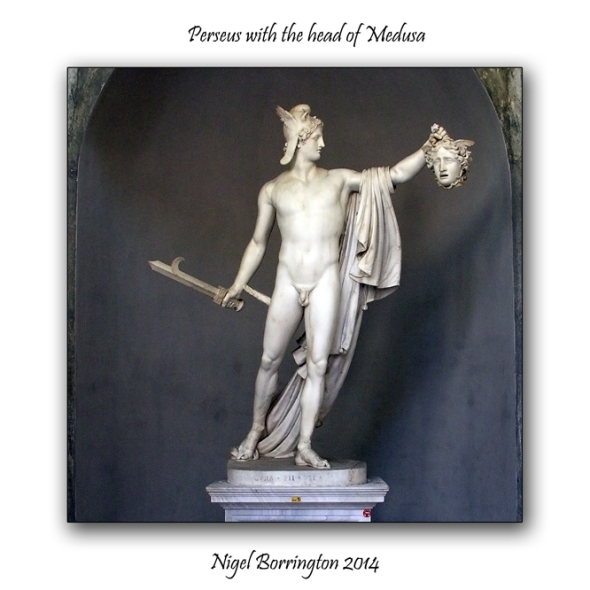 It has been a couple of years now since I last visited Rome and I am starting to think of a return visit at some point, on my last stay with my brother we visited the Vatican Museum.

One of the most amazing thing about this museum is that it holds much of the worlds fine arts along with artifacts from per-christian time, including the classical Greek period and the time of the pyramid building in Egypt.

I captured this image of “Perseus with the Head of Medusa” by Antonio Canova (1757 – 1822) as its just a wonderful work of art as with all his sculptures.

Medusa was one of three sisters, the gorgons, but she was the only mortal one. Some versions say all three were born as monsters, but the predominant myths had them as gorgeous maidens. Medusa was so beautiful that Poseidon was crazy about her, but she didn’t care about him; Poseidon turned her and her sisters into monsters with live snakes covering their heads. Medusa kept her beautiful face but everything else was so monstrous. And whoever dared to look into her face ended up being turned into stone.

Perseus thus had a hard task. He asked Athena and Hermes for help and two of them, together with the nymphs, provided winged sandals to fly him to the end of the world where gorgons lived, a cap that made him invisible, a sword and a mirrored shield. The latter was the most important tool Perseus had, since it allowed him to see a reflection of Medusa’s face and to avoid being turned into stone.

medusa-headWhen he cut Medusa’s head off, from the drops of her blood suddenly appeared two offspring: Pegasus, a winged horse, and Chrysaor, a giant or a winged boar. It’s believed that those two were Medusa’s children with Poseidon.

In any case, once he accomplished his task Perseus flew back and escaped Medusa’s sisters who tried to reach him. Later, Perseus used Medusa’s head as a weapon in many occasions until he gave the head to Athena to place it on her shield.

The myth of Perseus and Medusa was one the most powerful inspiration for many artists in the ancient times, but it hasn’t lost its artistic significance to the present day either. Paintings and sculptures of the moment of beheading or Medusa’s portrait itself are famous all over the world. One of the most known art work is the Medusa shield by Caravaggio, painted at the end of the 16th century. It is exposed in the Uffizi museum in Florence. Close by the museum, in the main plaza of Firenze (Florence) there is a sculpture of Perseus.

This exquisite marble statue of Perseus is being restored thanks to the Generosity of the Northwest Chapter of the Patrons of the Arts.

Antonio Canova (1757 – 1822) was born in Possagno, a village near Venice. He spent most of his youth studying, with a strong bias towards the art of sculpture, and was greatly rewarded by the benefit of his grandfather’s stonecutting. His move to Rome as a young man gave him the opportunity to examine the splendid relics of antiquity, and put his abilities to the test.

Canova’s Perseus had not been commissioned by anyone, thus he put it up for sale. Giuseppe Bossi, secretary of the Academy of Brera, and personal friend of the sculptor wanted to place the Perseus in the Foro Bonaparte and he had already begun the payments when a letter came from Cardinal Doria informing Canova that Pope Pius VII wanted to buy the sculpture for 3,000 gold coins in order to place it in the Vatican Museum. Thus, the Perseus was moved to the Vatican and was placed on the empty pedestal of the famous Apollo Belvedere which had previously been moved to Paris by the French, following the Treaty of Tolentino. Pope Pius VII also appointed Canova with the prestigious award received by Raphael under Leo X: the Inspector General of Fine Arts. The location of the statue on the pedestal of the famous Apollo together with the nomination of the sculptor as Inspector, consecrated Canova’s success.

The imposing statue depicts the hero of Greek mythology Perseus, son of Zeus and Danaë, with the helmet of Pluto (which had the power of invisibility), the winged sandals of Mercury and the diamond sword given to him by Vulcan.
These gifts were granted to Perseus in order to allow the hero to defeat Medusa, against whom he was sent by Polykleitos, king of the island of Serifos.

Canova represented the Perseus triumphantly raising his left arm with the head of Medusa. The excitement of the action is frozen as is customary of the classical style. The Argive hero has similar proportions and positioning to the Apollo Belvedere.

By following the classical theme of the heroic male nude in action, Canova seems to have been able to achieve results as advised by Winckelmann and the Neoclassical age, according to which the only way to become great is to be inspired by ancient models. Stendhal said that Canova imitated the Greeks, but like them, his genius invented a new beauty.