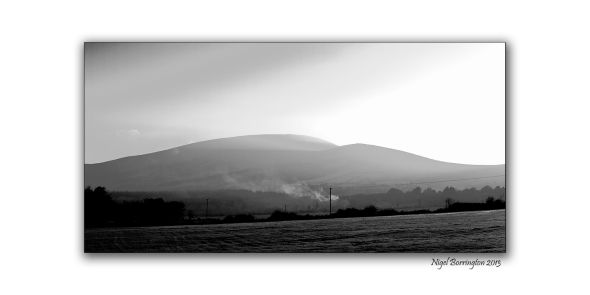 Rising as a huge heathery dome amid gentle green countryside, Slievenamon’s profile naturally attracts the eye. This is an easy mountainwith with a broad and clear track leading all the way to the summit cairn.

On fine days there are extensive views, taking in all the best walking areas in the South East of Ireland.

Slievenamon is a mountain of history and mystery of lore and legends. Its name means the ‘Mountain of the Women’ and the story is told how all the fairest women raced to the top to claim the hand of the warrior, Fionn Mac Cumhail. Fionn secretly fancied Grainne, the daughter of the High King of Ireland, so he advised her how to win the race!

Although it looks like a solitary height, Slievenamon is surrounded by a series of lower heathery humps. Some of these, like the main summit, are crowned by ancient burial Cairns. The highest cairn is said to mark the entrance to the mysterious Celtic underworld.

The Celtic Underworld … and the Otherworld

According to the Celtic myths, the Celtic deities and the fairy folk lived in the spiritual domain that was generally called the “Otherworld”. These domains were usually hidden from mortal eyes, though not always. Sometimes, human beings are admitted, sometimes against their will or better judgement.

In the Welsh myths, the Otherworld was often called Annwfn or Annwyn, and the fort or castle was usually known as Caer.

The Underworld is what many people today might call the afterlife, referring to the spiritual realm in which newly dead spirits and souls go. Sometimes the underworld is identified as being like the Christian Hell because Hell is sometimes pictured as being under the Earth. The Underworld is possibly linked to the Earth because that is where the body goes after death.