Cows, a Poem by Paul Muldoon

Paul Muldoon (born 20 June 1951) is an Irish poet. He has published over thirty collections and won a Pulitzer Prize for Poetry and the T. S. Eliot Prize. He held the post of Oxford Professor of Poetry from 1999 to 2004.

At Princeton University he is both the Howard G. B. Clark ’21 Professor in the Humanities and Founding Chair of the Lewis Center for the Arts. He has also served as president of the Poetry Society (UK)[3] and Poetry Editor at The New Yorker. More ……

Even as we speak, there’s a smoker’s cough
from behind the whitethorn hedge: we stop dead in our tracks;
a distant tingle of water into a trough.

of a bottle of Redbreast. Had Hawthorne been a Gael,
I insist, the scarlet A on Hester Prynne
would have stood for “Alcohol.”

This must be the same truck whose taillights burn
so dimly, as if caked with dirt,
three or four hundred yards along the boreen

(a diminutive form of the Gaelic bóthar, “a road,”
from bó, “a cow,” and thar
meaning, in this case, something like “athwart,”

“boreen” has entered English “through the air”
despite the protestations of the O.E.D.):
why, though, should one taillight flash and flare

then flicker-fade
to an afterimage of tourmaline
set in a dark part-jet, part-jasper or -jade?

That smoker’s cough again: it triggers off from drumlin
to drumlin an emphysemantiphon
of cows. They hoist themselves onto their trampoline

and steady themselves and straight away divine
water in some far-flung spot
to which they then gravely incline. This is no Devon 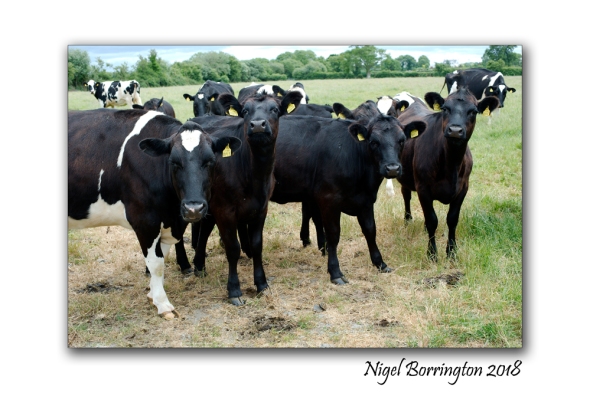 cow-coterie, by the way, whey-faced, with Spode
hooves and horns: nor are they the metaphysicattle of Japan
that have merely to anticipate

scoring a bull’s-eye and, lo, it happens;
these are earth-flesh, earth-blood, salt of the earth,
whose talismans are their own jawbones

buried under threshold and hearth.
For though they trace themselves to the kith and kine
that presided over the birth

of Christ (so carry their calves a full nine
months and boast liquorice
cachous on their tongues), they belong more to the line

that’s tramped these cwms and corries
since Cuchulainn tramped Aoife.
Again the flash. Again the fade. However I might allegorize

some oscaraboscarabinary bevy
of cattle there’s no getting round this cattle truck,
one light on the blink, laden with what? Microwaves? Hi-fis?

Oscaraboscarabinary: a twin, entwined, a tree, a Tuareg;
a double dung-beetle; a plain
and simple hi-firing party; an off-the-back-of-a-lorry drogue?

Enough of Colette and Céline, Céline and Paul Celan:
enough of whether Nabokov
taught at Wellesley or Wesleyan.

Now let us talk of slaughter and the slain,
the helicopter gunship, the mighty Kalashnikov:
let’s rest for a while in a place where a cow has lain.