What do Hover flies and Insect see with their compound eyes ?

Hover Flies, such as the this one above, look at the world in quite a different way than humans do. The structure and function of a flies eye are completely different from ours, and so they see shapes, motion and color differently. Flies are also able to see light in a way humans cannot.

Structure of a Compound Eye

Compound eyes are made up of thousands of individual visual receptors, called ommatidia. Each ommatidium is a functioning eye in itself, and thousands of them together create a broad field of vision for the fly. Each ommatidium is a long, thin structure, with the lens on the outer surface of the eye, tapering to a nerve at the eye’s base. When the ommatidium receives light, it is filtered through the lens, then a crystalline cone structure, pigment cells and visual cells. Every ommatidium has its own nerve fiber connecting to the optic nerve, which relays information to the flies brain.

A human’s eye is attached to muscles that allow it to move, expanding the field of vision and making it possible for the eye to gather more information about its surroundings. Instead of moving their eyes, flies receive information from several different points simultaneously. A flies eyes are immobile, but because of their spherical shape and protrusion from the flies head they give the fly an almost 360-degree view of the world. In a human eye, the pupil controls how much light comes into it, which is focused by the lens onto the retina. The retina then relays information to the brain via the optic nerve. Because fly eyes have no pupils they cannot control how much light enters the eye. With no control over how much light passes through the lens, the fly cannot focus the image it sees. Flies are also short-sighted — a visible range of a few yards is considered good for an insect. 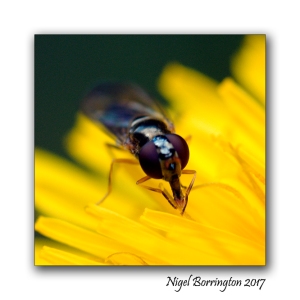 The best analogy to describe a flies vision is to compare it to a mosaic — thousands of tiny images convalesce, and together represent one visual image. Each one of these pictures represents information from the fly’s individual ommatidium. The effect is much like how we see stippling or newspaper print — up close the image is a lot of tiny dots, but take a step back and it’s a complete image. The more ommatidia a compound eye contains, the clearer the image it creates.

There’s a reason why flies are especially jumpy creatures that take off at the slightest flinch. A flies vision is nowhere near as clear or effective as a human’s, but it’s especially good at picking up form and movement. As an object moves across the fly’s field of view the ommatidia fire and stop firing. This is called a flicker effect. It’s similar to how a scrolling marquis works — with lights turning on and off to give the illusion of motion. Because a fly can easily see motion and form, but not necessarily what the large moving object is, they are quick to flee, even if the moving object is harmless.

Flies have limited color vision. Each color has its own wave frequency, but flies have only two kinds of color receptor cells. This means they have trouble distinguishing between colors, for instance discerning between yellow and white. Insects cannot see the color red, which is the lowest color frequency humans can see. However, houseflies have the ability to see polarized light, but humans cannot differentiate between polarized and unpolarized light. Polarized light is light in which the waves travel only in one plane.